Have you decided what you're getting your Dad this Father's Day (Sunday, 19th June in UK, Ireland, US and many other countries)? If you'd like to find a memorable alternative to socks, then you've come to the right place.

Here at OpenLX, we're passionate about quality and simplicity by design and we have a range of fun and easy-to-use devices, which make ideal and inexpensive gifts for gadget-loving Dads this Father's Day. From CodeBug, which is aimed at beginners, to PiFace add-ons for Raspberry Pi, which allow makers to take their creativity further, there's something for every tech-loving Dad.

CodeBug is perfect for gadget-mad Dads who like to tinker with new devices or those who have always wanted to learn to code, but never found the time. A small, programmable and wearable device retailing for just £15, CodeBug is aimed at complete beginners and is so easy to use that anyone can complete their first program in just a few minutes. It's not just for beginners, though, as CodeBug can also be used as the “brain” in more complex computing projects.

You can also personalise your CodeBug gift with ease. Simply follow the tutorial on the CodeBug website to create a basic program with your own scrolling message for your Dad. Download the program to your Dad's CodeBug and it will appear the next time the CodeBug is powered up.

Is your Dad a Raspberry Pi enthusiast? Or does he have a Raspberry Pi languishing in a drawer, because he has run out of ideas on where to take it next? Fear not! The PiFace range makes creating with Raspberry Pi as easy as pie!

Are you spoilt for choice thanks to the many PiFace boards available? If so, we recommend PiFace Control and Display 2, as it will allow your Dad to work easily with inputs and outputs and connect things like motors, switches and lights and it is therefore perfect for a wide variety of fun and interesting projects.

I am very much a man of many hats: CEO, designer, maker, researcher, trainer…etc. The last two days, however, have revolved around my role as one of the volunteer co-organisers of the Manchester Raspberry Jams.

If you're not familiar with Raspberry Jams (except of the edible variety), they are community groups set up to help users get the most out of the Raspberry Pi – a low-cost, credit-card sized computer. Although small, it's very versatile and Jam members (who range in age from 7 to 70-odd) can build a seemingly endless variety of projects, e.g. using the Pi as the “brain” of a robot that can drive itself.

Over the last two days at Manchester Central, we've been showcasing the latest inventions by Manchester Jam members at Business Rocks: “The global stage for tech innovation”, with headline speaker Steve Wozniak (co-founder of Apple Inc.). The event provided ample opportunity to impress and entertain influential people from key industries with Jam members' creations and prove that digital innovation is alive and well in Manchester.

Highlights on show included racing robots and yet another of my hats: the CodeBug RPi3 Pano Hat, which takes 360° panoramic pictures in an instant using 8 Raspberry Pi3, 8 Pi cameras and, of course, our very own CodeBug. 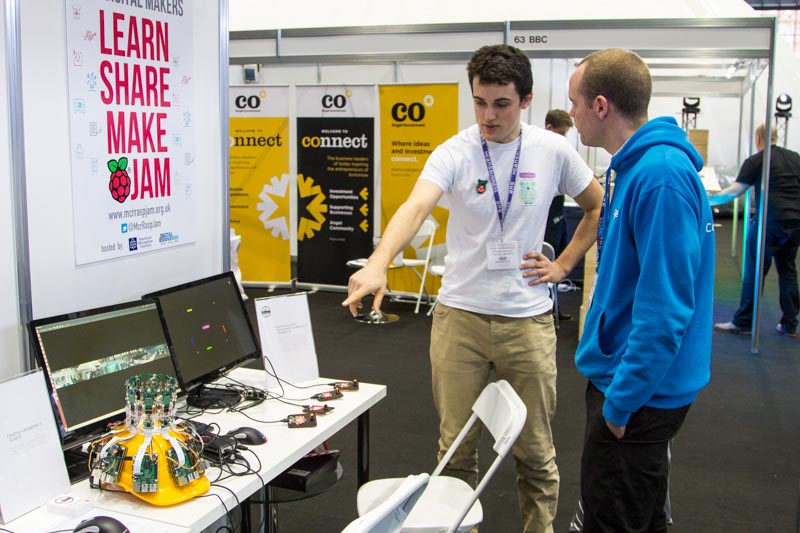 It's always great fun to be part of the Jams and help people bring their ideas to life. At Manchester Jam, we are committed to helping people get involved in digital innovation — whether experienced makers or complete beginners. As President Obama recently said:

In the new economy, computer science isn’t an optional skill — it’s a basic skill, right along with the three ‘Rs’.

As learning to code becomes increasingly important in our increasingly digital world, the Jams can provide both a useful hobby and a fantastic learning environment for both young and old — and they're open to anyone.

If you'd like to get involved, why not sign up for the next Manchester Jam session at “The Shed” at Manchester Metropolitan University (MMU) on Saturday, 11th June. Or find a Raspberry Jam near you here. 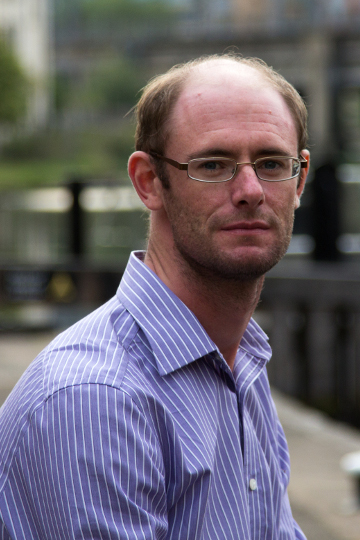